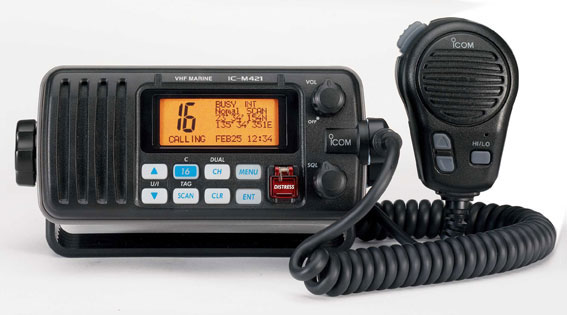 Using DSC for Mayday enables an automatic transmission of both the Mayday signal and your present position, providing your DSC set is interfaced with a GPS.

Just lift or slide the safety latch and press the red Mayday DISTRESS button (far right in the photo above).  Some sets allow you to specify the type of distress eg 'Sinking'.

Mayday – NAME and ‘MMSI* or call sign’, spoken once

If no DSC acknowledgement is received, and offer of assistance is accepted from another vessel, cancel the DSC alert to prevent it automatically retransmitting.

Acknowledgement of a DSC distress alert

When a DSC controller receives a Distress alert it will sound an audible alarm.

Immediately cease any transmission that may interfere with Distress traffic and continue a watch on CH16.  Acknowledgement of a DSC alert by use of DSC is made only by coast stations and vessels fitted with Class A or B DSC controllers.  There is no facility on a Class D controller to acknowledge a distress alert by DSC.  If there is no DSC acknowledgement after a short interval, acknowledge by voice on CH16:

The following signals, used together or separately, indicate distress and need of assistance: